Did you know that only 20-30% of our life expectancy can be determined through our genes? If you want to live to be 100, you may need more than just a sound set of X and Y chromosomes passed down from your parents.

Lifestyle is the most important factor in determining not only how long you live, but the quality of your long life.

It turns out the people from a small island off the coast of Japan, Okinawa, have figured out a secret recipe for living to be more than 100 years old.

Scientists researching for the U.S. National Institutes of Health and Japan’s Ministry of Health have been following Okinawan’s who are older than 100 since 1976 in the Okinawa Centenarian Study (OCS) and they’ve learned that there are some very typical traits for all those who live to be so vital at such an advanced age. 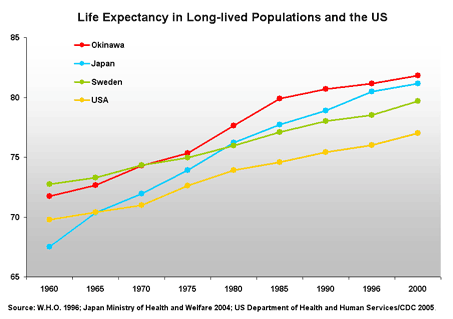 2. Their diets are low in salt, high in fruits and vegetables, and contain plenty of fiber and antioxidants that protect against the major diseases of the West, including heart attack and cancer.

3. Although they consume more soy (60-120 grams daily) than almost any other population on earth, it is not GMO soy as grown in the US. Soy is high in flavanoids and is healthful when not genetically modified.

4. Okinawans don’t overeat. They have a practice called hara hachi bu, which means “8 parts out of 10, full.” They never eat so that they are stuffed, but just mostly sated. This means their daily caloric intake is far lower than ours – around 1800 calories. We westerners sometimes scarf down twice that much in a day.

5. Okinawans don’t suffer from dementia or senility as often, either, due to a diet high in vitamin E which helps keep the brain vital.

6. Elderly Okinawans are respected and kept as an integral aspect of their overall communities. They feel valued as individuals even as their age progresses and this can only benefit their mental and physiological health. Elderly members of this society express a high satisfaction level with their lives.

It isn’t just something in the water in Okinawa, but when Okinawans move away from their island and take up the western diet and lifestyle, they no longer enjoy longer lives. Within one generation of taking on our bad habits, their life-spans shorten considerably. Cancer and hear-attack rates practically double.